None of this content has been confirmed by El Boletín de Pacoima.  This is all puro chisme.  Thank you to all three contributors. 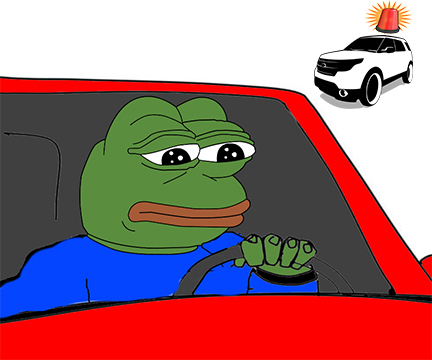 Are there a lot more undercover cops patrolling Pacoima??? Pepe the Frog by AnimeReallySucks. Rendition by Pacoima Bulletin/ El Boletín.

Last week, a cop stopped me as I was leaving the weed shop near the KFC on Laurel Canyon and Van Nuys Blvd.   The dispensary’s parking lot was full so I parked on the last stall on KFC’s lot. The officer rolled up behind me as I was about to pull away.   He said he stopped me because I looked suspicious coming from the alley. (Mind you, he approached me asking me how many kilos I had in the car.) I told him I was coming from the weed shop.

I stayed quiet, even when he asked me what my “condition” is as he skimmed through my medical recommendation.

After he let me go, I asked the office why he stopped me. He said he was from downtown, and he didn’t know there was a weed shop in the alley. Supposably there are many other unmarked police vehicles (he had an unmarked grey Ford Explorer) sent from downtown to patrol the area this time of year to prevent burglaries.

This was confirmed right after when I saw an unmarked grey Crown Victoria pulling over a small green Honda right behind the taco truck on Laurel Canyon in front of Ritchie Valens gym.

The scene of the tragedy Nov. 14, 2016 as reported by NBC Los Angeles. Lopez was riding his bicycle to school when he was caught between the collision of the two pickup trucks. He succumbed to his injuries and died at the scene. He was 15 years old.

Por ahí corren la voz, que the Lopez family got themselves a lawyer after they heard that the driver that killed Saul Lopez may have switched seats with the passenger, según los testigos de la tragedia.

Why would anyone do that? No tendrían licencia o qué? Well, por ahí cuentan que los supuestos culpables del choque ya han tenido problemas con la ley, supposably for doing contracting work without a license y no sé qué. Not to sure or entirely confirmed, pero si los chismes son verdad, aside from possibly getting a hefty settlement, this might turn into a criminal case. Justice or nah?

Okay, okay we all get it. Some people are putting so much effort trying to help Pacoima come up and be nice and healthy and all (shout out to Pacoima Beautiful!), but wtf is up with Van Nuys Blvd?

To be honest, I was all for the plan when I first saw it, and even after I went to a few meetings, but the final result? No manches, nos engañaron! They had these nice little designs with painted bike lanes and parklets, and little people in the pictures and it looked all nice and you can imagine the raza NOT riding the bikes on the sidewalk, y hasta imaginas tu bendita abuela en bicicleta using the bike lanes, pero NEL.

WTF!! Okay, I’m not gonna get crazy, but all I’m gonna say is that they better not leave that shit like that; that shit looks incomplete! If they are gonna do something, they better do it right! Nos ven con cara de pendejos o que? And I don’t even care that Felipe Fuentes dumped us for a better paying job (maybe he just couldn’t handle all the dissent from his constituents, maybe dijo, les trato de ayudar y todavía chingan…a la fregada! …)   And I don’t care which of the 30 people who are running to fill  Fuentes’ seat gets elected! Para mi, me da igual porque nosotrxs seguimos aquí, nosotrxs de Pacoima, the northeast san Fernando Valley, CD7, todxs seguimos aquí y seguiremos aquí tomando decisiones en nuestros barrios!