Las Palmas apartments has 26 units and is one of the larger buildings listed as needing earthquake retrofitting.  Photo by El Boletín/ Pacoima Bulletin

Earlier this month, the city of Los Angeles released a list of thousands of apartment buildings that are considered unsafe in the case of a major earthquake, requiring the buildings to be retrofit or demolished.  Although many of the building listed were located in West Los Angeles and the San Fernando Valley (mostly in the west Valley), Pacoima has only five buildings listed.

All five buildings have apartment units and are along or near Van Nuys Boulevard.  In total the identified buildings hold 87 units.  Two buildings hold about 25 units each, and one of the buildings is the Coral Bells Motel.

At sight, one can can understand how these multi-story buildings are dangerous; usually a 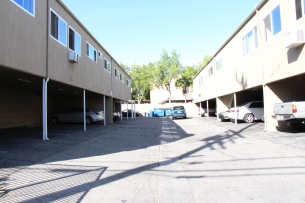 second floor is being help up by whimsy posts or columns.  There is no need to imagine what would happen in case of a major earthquake; many of the building that collapsed in the 1994 earthquake were built in this fashion.

This style of building were popular after World War II, when Los Angeles sprawled to West LA and the Valley, according to a report by the Los Angeles Times.    These apartments accommodated the evolving angeleno car culture, usually offering parking spaces on the first floor.

In an interview with KPCC, the mayor’s chief resilience officer, Marisso Aho, said the building owners were notified in March and have seven years to comply to an earthquake retrofit order, which has an estimated cost of $5,000 per unit in each building.  Building owners must also notify their tenants, who, in most cases, will be able to stay in their units during the retrofitting process.

Did you get one of these brown paper bags in the mail? Don’t throw it away!

The U.S. Postal Service placed bags like this one in mailboxes this past week. Non-perishable foods collected in these or any bag or box and placed near mailboxes May 9 will be picked up and delivered to MEND.

You might have been surprised to have received a brown paper bag in your mailbox this week, but it is no joke.  The U.S. Postal Service placed those bags in mailboxes throughout the area t0 collect food for the “Stamp Out Hunger” food drive.  Residents are suppose to fill those bags with canned and non-perishable food and place them near their mailboxes on Saturday, May 9 when letter carriers will pick them up.  The food will then be transported to local food banks, like MEND (Meet Each Need with Dignity) in Pacoima.

This is the 23rd year mail carriers will be collecting food.

Last year, MEND received about 120,000 pounds of food from the campaign, according to MEND President and CEO  Marianne Haver Hill.  This year, they hope to receive 150,000 pounds.

It is not obligatory to use the brown paper bags sent out; food can be placed in any bag or box.  Just set the food next your mailbox before you letter carrier arrives and they will pick it up.

MEND is also calling for volunteers to sort the food.  To volunteer, go to Reception Desk at 10641 San Fernando Road or submit an application online.

Residents from the northeast Valley expressed frustration yesterday about the lack of information provided by the California High Speed Rail Authority. At a meeting held at Pacoima City Hall, residents showed discontent with the limited information repeatedly presented at every meeting, asked for transparency on the Authority’s decision making, and demanded the Authority make a greater effort in reaching out to the community.

“You say that the [proposed rail] lines were moved based on community input; that should be public information,” said Nicole Chase, a resident who grew up in Pacoima and now lives in Sylmar. “I have yet to see the High Speed Rail say, ‘this is the number of house that will impacted.’ You’re doing all this fluff. I’m not interested in the fluffy.”

This month the rail authority revealed adjustments to the east corridor routes, which are planned to go under the San Gabriel Mountains if selected. No adjustment has been made to the alternative SR 14 route that will run along San Fernando Road and California Highway 14, which, according to an analysis by environmental group Pacoima Beautiful, will possibly affect more than 10,000 structures and displace more than 8,000 families.

One attendee asked the rail representatives at the meeting what holds stronger consideration, a rare, endangered lizard or the homes and livelihoods of thousands of families. 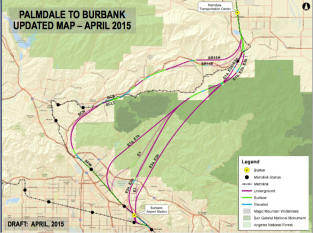 The most recent draft of the proposed routes (dark purple) in comparison to the previous routes (light purple). The SR 14 segment that runs through Sun Valley, Pacoima, San Fernanando, and Sylmar has no changes.

Another attendee asked how it was possible that a community with limited funds can gather more than 2,000 people, referring to the rally held at All Nations Church in Lake View Terrace on Dec. 14, yet the rail authority is failing to notify people who live along the SR 14 route about the project.

Representatives from the rail authority tried to address every question and concern at the meeting, which was conducted in Spanish with English translation.

“I understand your frustration with us not having detail,” said Genoveva Arellano. “We won’t do detailed analysis of these alternatives until somehow these get shrunken and refined to go into that environmental document.”

The environmental document is the last step before approving and adopting the final route. In other words, details of displacement and community impact will not be available until a final route is considered.

As far as involving the community, Arellano said the authority has mailed thousands of letters to residents as well published notices in more than a dozen local newspapers, yet people who live along the SR 14 route claim to not even know about the project.

More than one community member at this meeting said the rail authority needs to try harder, especially in Pacoima where stakeholders are not very reliant on email and social media.

Although this meeting was to inform and engage the community of the plan, not everyone in attendance was there for that.

Karina Ceja, a member of Communities Against Displacement– a grassroots organization of residents and organizations that formed to oppose the SR 14 route- presented a statement on behalf of the group to remove that route from consideration.

“As Communities Against Displacement we will hold the California High Speed Rail Authority accountable to their 3 guiding principles: 1) To protect natural resources and the environment 2) To preserve communities and 3) To improve mobility,” she read.

“We collectively agree that the SR14 would be the worst option and most contradictory to the California High Speed Rail Authority guiding principles, given that it will not preserve our community, it will not improve our local mobility and it will create more environmental impacts during the long construction phase.”

Arellano thanked Ceja and the rest of the attendees for the comments, and welcomed them to submit all comments and concerns to the Authority in writing for consideration.

The route analyses are slated to be presented to the California High Speed Rail Authority Board this summer.

[Video] Tours are now being given on Pacoima’s murals

You have probably seen the many murals that have popped up the past few years around Pacoima, mostly along Van Nuy Blvd, dubbing the area “Mural Mile.”  Soon after Mural Mile’s inception, the Museum of the San Fernando Valley has been conducting walking tours of the murals.  Check out this video tour produced by videographer and lecturer at California State University Northridge, Miguel Angel Duran.

The video follows one of the tours  conducted every third Saturday of the month.  In the video, many of the murals are featured and, like on the actual tour, artists who painted the murals give insight on their works.

If the video is not enough to satisfy your interest, anyone can join the walking tour by getting tickets from the Museum of the San Fernando Valley website for a $15 donation.  It might seem a lot but the funds are used to maintain the murals.  So see it as an investment in your community and as support for public art.

As for Duran, the video producer, he was born and raised in the Pacoima/ San Fernando area.  He attended San Fernando High School and CSUN, where he now teaches video documentary.  He also owns Start Now Studios.  More of his videos can be seen on their website, including a video on the history about the Assata Shakur mural and another on the start of CSUN’s Chicano/a Studies program.  Check it out.